Today there was a bush fire that swept across my land.

This is one of the challenges that need to be faced here, in Central Portugal. Many of the established farmers/campesinos in this area are accustomed to burning off, and now with the climate getting drier the risk of fire becomes higher which then threatens the land from ever establishing itself beyond the first or second stages of succession.

From what I’ve understood the reasons for burning off is usually one of the following:

I have yet to discover by personal account, why they prefer to burn off rather than cut and mulch/compost the organic matter. I would guess that it’s about business, getting a job done cheaply and quickly, stemming from some kind of poverty too I could imagine. It is most certainly something that has been accepted in the culture for a long time now.

It does seem to me also, that there is a lack of love for what they are doing. It’s just a living for them, a means to an end, and far easier to clean a field of brambles and scrub with a light of a match than cut it all down and collect it to use as compostable material. The problem now though is that with climactic changes the consequences of lighting fires, even in mid winter when everything is dry results in what happened here today. They are not aware of the consequences of their actions, yet when they lose control of what they start, such as what happened today, they are rarely going to hang around to take responsibility for it. I could hear two people shouting to each other when the fire had first started just over the rise. I got the impression that they were trying to do a controlled burn but the strong winds took hold of it and they lost control. There was evidence around that area indicating that they had tried to shovel dirt onto the fire in order to put it out, before realising that it was beyond them and making a quick exit.

So we are in February, and we are already having bush fires. Many who have lived here a long time say that they have never seen a drier winter. It seems as though we may be in a positive feedback loop. The trees around here are either all cut down or burnt from forest fires and now there are no trees to call out to the sky for rain.

My friend Jose told me in the old days how this land used to be all forest and when the gestas grew (the main leguminous brush plant that propagates itself around here during second stage succession, after the grasses) the farmers would fight over the gestas, because they were valued as ideal animal bedding that when soiled would be put back into the soil. The term they use is ‘estrume’. Literally means ‘manure’.

Here is a bit of a close up with respects to what a ‘Gesta’ looks like. A leguminous, meliferous broom brush, allegedly was used for thatched roofs as well … 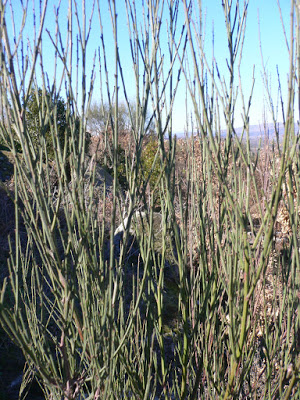 … and quite combustible really … 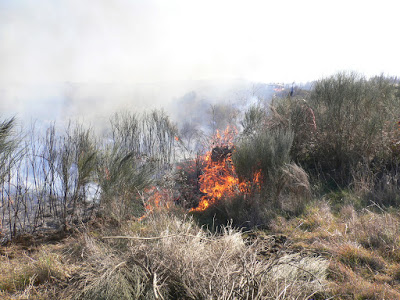 So, I came face to face with my adversaries today; The fire, the fire starters and the fire of fury that arose within me from witnessing this kind of (what I consider) ignorance.

And this is what we are up against here. Not an undertaking for the weak heart.

I have not assessed the full damage yet. I am glad though that the trees which I had just planted were saved. Some young Oak trees that were growing had been burnt though and probably won’t survive.

I have to consider what has happened as a blessing in disguise. It has raised my awareness of the things I need to design in here in order to prevent this thing from happening again. In the mean time I am able to get a clearer view of the boundaries, the way the land falls and I have clearer access to the wells which were covered in brambles before.

I have the opportunity now to see the boundaries of my land clearly and start thinking about how to design a fire break.

As my friend Jose said, this land used to be forest once. It can be that
again with conscious and concerted effort, and Love. With this experience I will be more aware of what I am up against and work appropriately towards this goal. I am becoming convinced though that we need more people here who can bring more consciousness to the area. This will be an important factor. Must lead by example.