Sandomil is an area about 20km west of Quinta das Moitas where a large fire had passed through earlier in the summer. The area that was burnt down was largely pine forest plantation but there were oaks, medronhos (strawberry trees) and cork oaks growing amongst them as well. We have friends that have a quinta in Sandomil and the fire came through and destroyed most of the vegetation on their land.

It was shortly after a large number of fires had occurred that Leen, one of my friends asked the question on Facebook. What’s stopping us from going into these burnt areas and replanting with acorns and chestnuts and other natives? That question led on to her creating a group on Facebook called ‘Plant Trees in Central Portugal‘ …

“What is stopping us from just planting trees? Make a walk in the forest in the coming days. Everything is seeding at the moment. Take some seeds (not all) and start germinating them in your windowsill, veranda, greenhouse or garden. Perhaps in the North the seeds need to be stratified. When they catch on, you plant them when the rains start to fall. On an early Sunday morning carrying a shovel and a bag of trees, no-one will bother you with any questions. Every streetcorner, every open place, everywhere where you think a tree would be needed. Search on the Internet for Todmorden Edible Gardens (or the TED talk about it at www.ted.com) or Guerilla Gardening and you’ll see what I mean. No need for subsidies, just a bit of courage and civil disobedience. Collect some friends who do the same with you (borrow their garden, tools, time) and within a year you have done something substantial. The best time to plant a tree is twenty years ago … The next best time is to plant a tree today.”

When seeing the initiative the thought of the burnt land around our friend’s quinta came to mind so I suggested it as a potential space for where we could gather a group of people to join in planting some seeds. A group of positive people soon came together. Emil suggested that we could spend the afternoon making seed balls with a massive variety of seeds that he had been collecting and would contribute. He had collected seeds from over 50 species of trees, shrubs and nitrogen fixing ground cover species:

So we made a plan to spend the morning planting acorns and chestnuts in the fire damaged areas around the quinta and the afternoon making some seed balls which they could keep somewhere until dry and then throw them out into areas they thought could do with it.

As we were driving there and made our way into the burnt area we noticed that a lot of the medronhos (strawberry tree) and cork oaks were resprouting which was good to see. The pines had not come back, they don’t usually survive fire anyway, so in a sense what’s happened has cleaned out the predominant (mono)culture of planted pine that are actually the hazard when it comes to forest fires, and set the stage for a regeneration. Along with this of course a new awareness needs to emerge, for it they continue to replant pine in the area then they will only be repeating the same mistakes. Speaking of mistakes, another thing that we observed while crossing through the damaged was groups of workers that were cutting down the damaged pines, piling them up and burning them. I couldn’t understand why they chose to do this. Burning a resource that has value (even if it’s just as firewood) and having heard reports of erosion gullies already having formed after the fire it seemed crazy that they weren’t even considering doing something as simple as laying the logs down along contour to create erosion control banks. I wondered who was paying for this and whether this was part of the EU ‘grant’ that Portugal got for the fires earlier on in summer. This is just some of the madness that goes on in Portugal.

On arrival we counted a total of about 16 volunteers, almost 20 including kiddies who also did some planting. This is some of the crew … 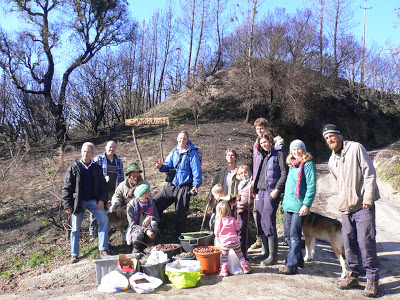 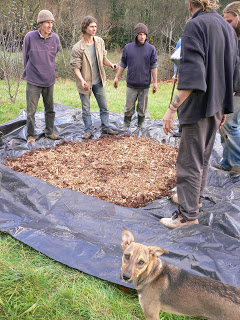 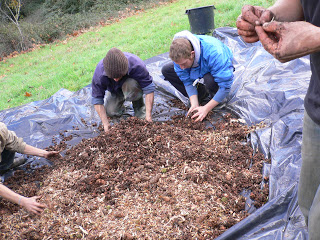 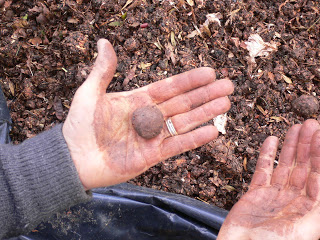 One of the things I’d probably try and plan better next time is how to cover the area? Do we just each randomly go planting in all directions with the chance that some of us might go over the same area as someone else had done previously or do we all stick together as one group and float around like a school of fish where we can all stay within visual distance of each other and where some smaller groups can converse also while working etc. We tried the anarchic method on this day with everyone seperating, but next time I’d like to try it as one group. Perhaps it could be more fun.

In case anyone is reading this and is interested in joining the groups: