One night, a few weeks ago, I was driving my friends Tiago and Tim home from Fornos. There was a small dark stretch where, last year, at night time also, I’d seen a little hedge hog on the road and so had stopped and picked him up and carried him across the road by hand to a place of safety. A memory that often came back to me when driving along this road. This time, in almost the identical spot I saw a white furry ball that I instantly thought was the same little creature I’d helped last time (or maybe his family?). This time however it turned out to be something different. Tiago got out of the car and went to pick the little fellow up and brought him into the car. It turned out to be a little owl, which we found out later was actually called Little Owl (Athene Noctua). 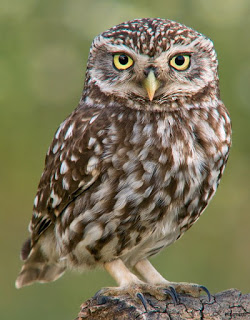 Tiago was assigned as ambulance and carer and so in the next few days the little owl found its way into the hands of the right people at CERVAS in Gouveia.

Through Tiago I was able to keep in touch with it’s progress and was surprised and excited when I received a message from him saying that they were looking for a farm around Vila Ruiva where they could release her back to nature. It was a beautiful experience to see our little friend again, and especially to be gifted with the honor of setting him free again into the wild.

Ricardo from CERVAS came and did a little presentation on the various kinds of owls that exist in Portugal prior to setting it free. We were asked to give it a name and so the name Lua was chosen. The timing just so happened to coincide with a little jam we were about to have so it turned out to be a nice little ceremony during his flight to freedom. A very symbolic occasion for many of us who were present at this event.

What to do if you find an injured wild animal?