I’m beginning to make distinctions, some crazy dualisms, in this ‘out of the matrix’ society that is building around me.

I seem to have identified something in this ‘movement’, of people back to the land, desiring to live ‘off-grid’. Or perhaps rather than something that I’ve identified, it’s just a feeling, between those who I resonate with and those who I don’t. Where I feel love, or at least some interest, and where I don’t. I guess there are many ways to tell it, but let me tell it how I tell it …

Let’s just say that there is two kinda people in this world. Those who are inspired, feel the call to act on the volition of their hearts, follow their dreams, and are willing to see themselves in others, and then there are those who have either been distracted, or are running away from something (usually their own shadows), their motivation or action coming from fear (as opposed to inspiration).

Another thing that I’ve witnessed in some people is the incapacity to really listen. To truly listen. With empathy. To just be still, and listen. They will either be hearing something completely different, or just plain not understanding, but pretending that they do (and I’m not talking about old portuguese village folk). I’m just saying that for some reason some people’s ability to listen is severely undermined. Usually because they’re in need of healing of some sort, and funnily enough, there is a healing effect simply from ‘being present’ for someone and listening, let alone empathy. I must admit, it’s hard to always be present and empathic with people, (especially when there are so many intense people around), but we all got to try, and I really appreciate the kind of people that do try.

One other thing that I’ve witnessed here is listening to people so full of their own knowledge that there is no chance for anything new to enter. They’re watertight. That would really impress me if they were a damn holding a few megalitres of water (especially in this sandy landscape), but we’re all human beings, and we are streams, so we gotta flow. It’s not that I have anything agains’t knowledge, it’s just that knowledge is no match for kindness.

I think it’s important to share these things sometimes for the benefit of being … transparent, or maybe just being clear about knowing what it is that I’m wanting to attract around me:

1. Be Impeccable with your Word: Speak with integrity. Say only what you mean. Avoid using the Word to speak against yourself or to gossip about others. Use the power of your Word in the direction of truth and love.

2. Don’t Take Anything Personally
Nothing others do is because of you. What others say and do is a projection of their own reality, their own dream. When you are immune to the opinions and actions of others, you won’t be the victim of needless suffering.

3. Don’t Make Assumptions
Find the courage to ask questions and to express what you really want. Communicate with others as clearly as you can to avoid misunderstandings, sadness and drama. With just this one agreement, you can completely transform your life.

4. Always Do Your Best
Your best is going to change from moment to moment; it will be different when you are healthy as opposed to sick. Under any circumstance, simply do your best, and you will avoid self-judgment, self-abuse, and regret.

Sounds pretty simple huh? Fact is, it’s incredibly hard, At least I’m beginning to see now that things are not always meant to be easy and that it’s the challenges that bring us closer to the light.

Justin is an enquiring and tinkering engineer (fully qualifiied I might add). He’s done some great work here on Quinta das Moitas during his first visit and now he’s been back now for the second time around. This time he completed a little project involved with making sure I can easily access clean drinking water here at Quinta das Moitas.

A water source from a rock face was dammed creating a settlement tank before the water gets drawn off to fill the main storage tank and to supply fresh drinking water. The water overflows and fills a small pond that feeds a two tiered (terraced) garden before eventually seeping into the main growing area. Pics do not show the complete layout but you should get the idea. The sediment and nutrient in the settlement area and overflow pond can then be put directly into the growing areas.

The project still needs the tiered gardens to be completed (more soil and planting) but the main engineering is complete.

It is what it is and it works magnificently. 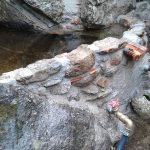 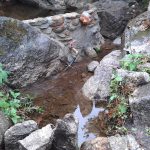 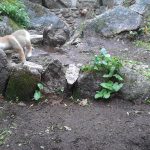 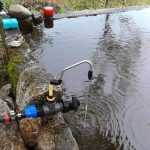 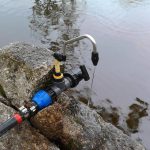 Designed and built by Millo and Justin.

Ever feel like there’s not enough time to do everything you want? Going with the flow anyway …

So yeah, as usual, I feel like I’d like to be writing more, but hence my energy is called to many directions. I figure if I can put small posts, keeping regular updates then that would be better than a big post every now and again. Let’s see if I can manage to get into gear of doing ‘quick posts’.

A lof of news to tell, but I’ll obiously just deal with what I can …

We finally found a home for the last of wild Bunda’s special 13 puppies – yes you heard right – 13!. That was a serious mission! I couldn’t have done it without the help of my dearest friend Franji Freedom. Another initiation on our journey. We also managed to get funding and find most of their new carers through a Facebook page we made for them called ‘13 Bundles of Abundance‘. I’m hoping that all carers will continue to post onto the page so that we can continue to see how each of the pups are developing.

I’ve just bought another ‘cheap and crappy’ caravan for a couple of hundred euro from a young gypsy guy. I’d like this done up as ‘Gypsy Caravan’ in honor of it’s previous travellin days, now parked safely (and hopefully permanently) on my land … 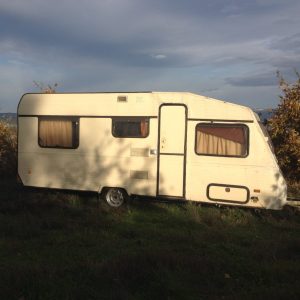 So now I have 2 cheap and crappy caravans, waiting to be fixed up for when I have the time, or when I can find suitable work exchange volunteers who would love a project like this. Here’s a foto of the other one I got from a friend with whom I did an exchange deal with. It’s condition is pretty much similar, slightly better, but needs work! 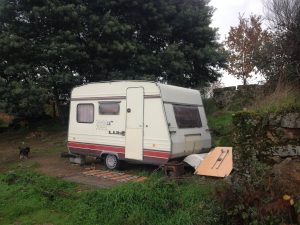 This is the one that I’ve already fixed up and that I’m now living in. Built using mostly material that I had in the barn. I’ve only got fotos of before and after …

I guess I do run the risk of being labeled as some kind of gypsy from the locals, but with a face like that? …

The benefit of caravans, for me at least, is that they can be rebuilt/reburbished quite quickly & efficiently and provide reasonably comfortable accommodation for people wanting to stay on the land, whether it be for temporary or permanent volunteers. This place seems to have also naturally become a place where people camp during their search for their peace of land (So, in a sense, it has become the bridge and meeting place that was symbolised in my dream that brought me here to Portugal). I am feeling much more comfortable now, to having people stay on the land while they’re looking for they’re own bit. I’ve been very busy with that, working together with my partner Franji Freedom, and things in Portugal are always so ‘complicado’. It leaves little time for work ‘on the land’, which is a problem for me. I like to work on the land. I’ve been here 6 years now and really feel like I want to inject more ‘juice’ into land development. So hence I really need to focus on getting more living space around here for ‘self reliant’ volunteers who can competently carry out work and fund the whole operation so that everyone who comes here is well fed. 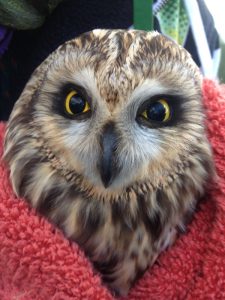 I’ll keep the post short and try and write again, sooner rather than later. Until then, wishing peace & flow in times of craziness. Speaking of which, let me just share some of the craziness around here. On our way back one evening from a friends place in the mountains we found what we later discovered was a Short Eared Owl. Very rare for these parts! It was hobbling alongside the track and looked like it’s wing had been broken. We managed to get it to CERVAS and Richardo tried his best to look after it but unfortunately it didn’t make it. Ricardo studied the injury and said it had been shot by a hunter a few days before maybe. That’s some of the crazy stuff around here, some of these hunters will just shoot anything that moves. I post this photo of our feathered friend in honour of it’s beauty and wisdom, Things that the world could do with more of …

Oh one more thing! Our small association are doing a Xmas Market on the 11th in Figueiro da Serra, a village not far from here. See flyer below, beautifully designed by our friend Sara at Cherry Pond Quinta. Please download and share the flyer around to anyone who you think might be interested in attending, or if you prefer you can share the event via Facebook. We’re still looking for some more musicians!