This article is a translation from an existing article written by Isabel A. Ferreira, titled ‘A Caça É Uma Aberração’. I’ve been given permission by the author to translate from Portuguese into English for the benefit of english readers. The points regarding the 7 myths of the hunting sector in Spain is sourced directly from an article on http://publico.es the subject of which is titled “Ecologists Dismantle 7 Myths of the Hunting Sector in Spain” (translated from Spanish).

Hunting is translated into the exteriorization of the most primitive instinct that exists in the human animal: the instinct to kill for pleasure.

No intervention of the human animal is necessary for the conservation of the species. NATURE itself takes care of this very wisely.

“To hunt is to provoke fear and suffering with more or less rapid mortal injury, victimizing innocent and newborn animals […] and sometimes people. It contaminates animals, humans and the area. It bothers and upsets many people and often makes them feel unsafe to be out in nature [often hunters don’t respect the limits] and pollutes with it’s lead cartridges. There are methods of controlling populations, balanced and responsible, causing less suffering and risk, which should be studied, decided upon and implemented by competent authorities”. – Dr. Vasco Reis – Veterinarian

Spanish Environmentalists Scientifically Unmask Seven Myths of the Hunting Sector
(What goes for Spain, goes for Portugal, where everything happens the same way).

Ecologists in Action published an extensive report to dismantle some of the arguments of the [hunting] sector and hunting activities that, according to official statistics, kills about 25 million animals each year in our country.

MADRID. -The National Hunting Office, the entity that brings together 80% of hunters federated in Spain, has as its motto: “We are part of nature.” defining itself as “conservationist”, “committed to the environment”, “defenders of nature, wildlife and habitats” and among its missions is “to defend hunting as the most ethical and sustainable activity in the management of natural spaces”.

The same happens with other associations of the hunting sector, such as Aproca, in Castilla La-Mancha where they indicate on their own web site – “Aproca’s objective is to defend a rational and sustainable use of the natural and forest environment, so that all activities of the association are developed with the most absolute respect for the environment, conservation of nature, preservation and balance between domestic and wild flora & fauna and protection of endangered as well as native species.”.

Due to messages such as these, where the activity of hunting is linked to a work of nature, Ecologistas en Acción has published an extensive report in which it attempts to scientifically dismantle some of the arguments of the sector and the myths surrounding hunting activities, that according to official statistics, kills around 25 million animals per year in Spain.

“While it is true that hunting in Spain is carried out every year by a smaller number of people, the sector as a whole has been strengthened as social and economic lobby, thus reacting to the growing environmental awareness of society as a whole”, says the report, prepared by the biologist Roberto Oliveros from a compilation of studies and technical and scientific documents.

Ecologists have summarized the results of their research into seven “truths about the impact of hunting in Spain” (and the same applies to Portugal):

1. It consists of killing animals for fun or for business

Hunting is basically supported by two activities: a sport or competition and another commercial based on tourism and hunting farms. Although there is no complete and reliable official data on the volume of money generated, says Ecologists, the FAES Foundation, linked to the PP, estimated profits in 2007 at more than 2,750 million euros. The former president of the Spanish Hunting Federation, Andrés Gutiérrez Lara, pointed out in 2004 that in addition to that money hunting moved another 6,000 million dollars in black money, without bills.

Ecologists also point out that the sector is made up of a small number of people (330,000 federates and 848,243 licenses in 2013), generally wealthy, such as large landowners, bankers, businessmen, aristocrats, politicians and members of the judiciary and the security forces. “Their work in recent years has been highlighted by the attacks on the regulations of nature protection and animal protection at European and state level and by a total lack of self-criticism of bad practices”, they say.

2. Not compatible with biodiversity conservation

The direct effect of hunting in Spain alone results in around 25 million animal deaths every year. To this needs to be added the loss of biodiversity due to the indirect effects of huntring: poaching, [illegal huntring] releases of game species (possible escape of hunting animals such as weasels and sometimes hunters even have been known to abandon, or even hang their dogs after a hunt), introduction of invasive or exotic species, hunting fences and other infrastructures. Ecologists note that as a result of hunting, other emblematic and protected species, such as the brown bear, Iberian lynx or wolf, are also affected by deaths. In addition, sanctions for the use of poisons in hunting areas has been increasing every year. Not even the most protected natural areas, such as national parks, have banned this activity, which has a moratorium until 2020, to remain active in these places. 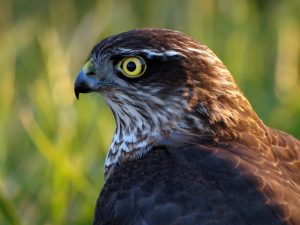 Increasingly, hunting is carried out on animals reared on farms and then released into fields to be hunted soon after, such as 1,350,000 red partridges launched in areas of intensive hunting in 2013. Ecologistas en Acción notes that this causes “Severe imbalances in ecosystems, displacing and harming native populations and the spread of exotic and / or invasive species such as Barbary Sheep, Asian Bighorn Sheep or Japanese Quail”.

In the province of Guipúzcoa is where one of the scenarios of bird poaching occurs. Something worrisome if you consider that it is an important area for the ​​migratory transit of birds (such as the common hawk pictured here).

4. It does not serve to manage the fauna nor to control overpopulation

Ecologistas en Acción argues that it is precisely the practice of hunting that often causes overpopulation of some species due to the release of animals or supplementary feeding. Also by the attempts to hunt males, who are the ones who obtain the most trophies, generating a “decompensation” in the species. In addition, a recent Supreme Court ruling considered that hunting and fishing “far from serving the purpose of eradication of alien or invasive species, determines its indefinite maintenance, if not aggravation.”

5. Limits the rights of the majority of citizens

Hunting activities accumulate complaints about cutting off of public roads, water courses or livestock tracks, by allowing hunting to be a preferential use in public forests and protected areas or by the intention to cause possible unintended inconveniences to game species such as the current hunting law of Castilla-La Mancha. The report also says that an average of 28 people die each year, not just hunters, from the use of firearms in hunting.

6. Does not favor rural development

80% of the territory of Spain is part of a hunting reserve with activity during most of the year. A 2014 study on the mountains of Andalusia concluded that self-consumption, recreational use and biodiversity conservation activities are more profitable than hunting in economic terms. “Hunting is not only not conducive to the development of the countryside, but also limits future development possibilities in the most economically depressed environments,” the report said.

7. Not only does it kill, it also mistreats

It is estimated that at the end of the hunting season, about 50,000 greyhounds are abandoned in Spain each year. Others are hanged or thrown to wells, as happened with a hundred dogs in the town of Villatobas in 2009. Ecologists point out that even animals used for hunting do not escape torture, same as the foxes hunted by dogs, wild boars hunted with spear, pigeon shooting, etc.

“Particularly striking is that in most hunting regulations, abandoned dogs and cats are caught by hunters by shots or traps, without their being subject to animal protection law. This measure leads to the deaths of thousands of domestic animals with little control by the authorities“, concludes the report.